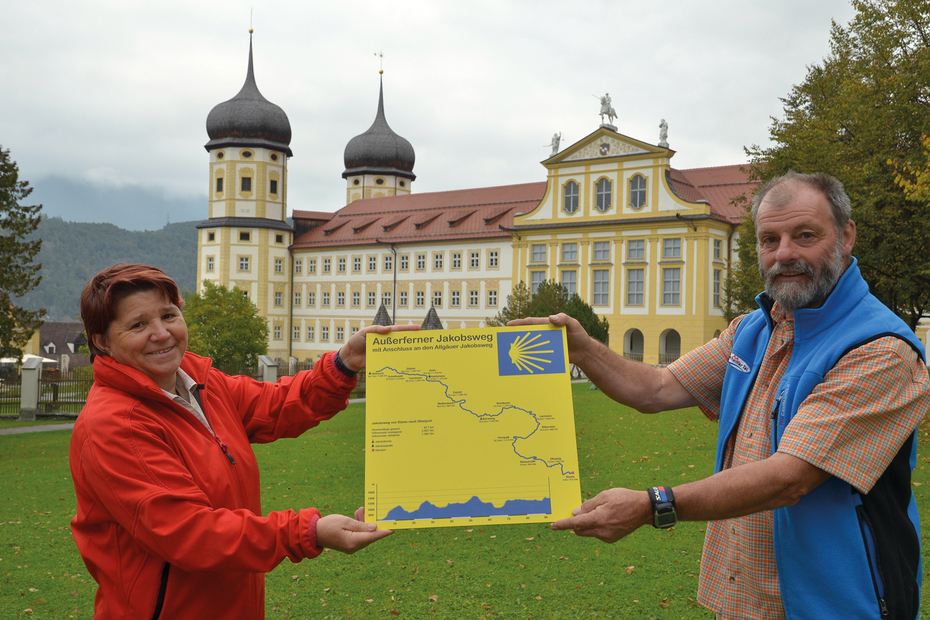 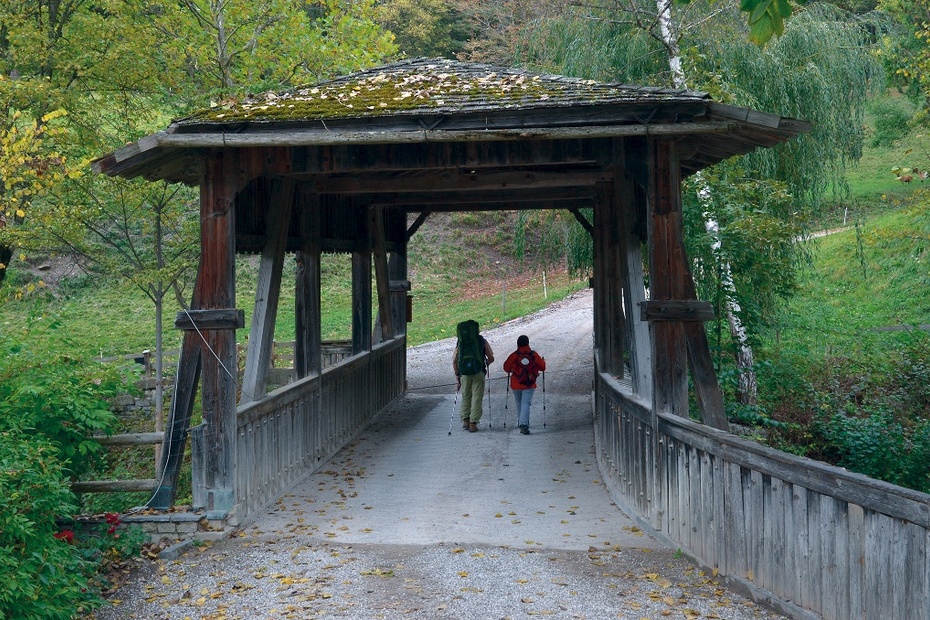 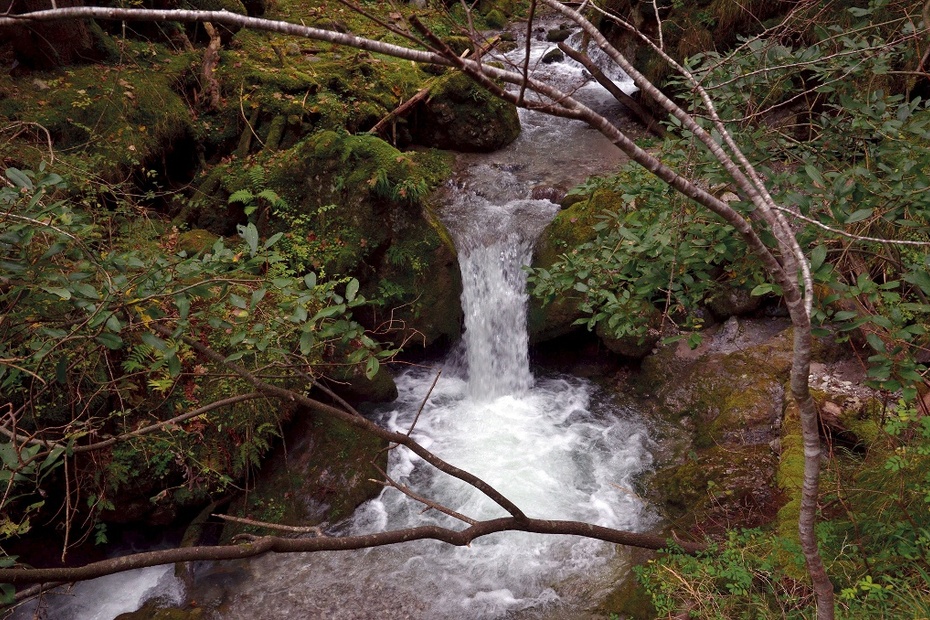 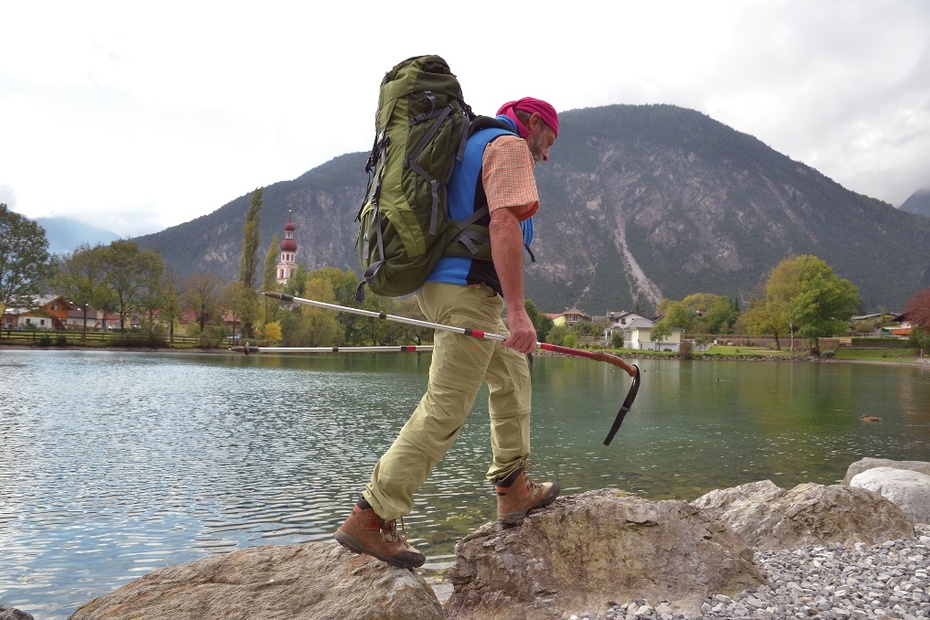 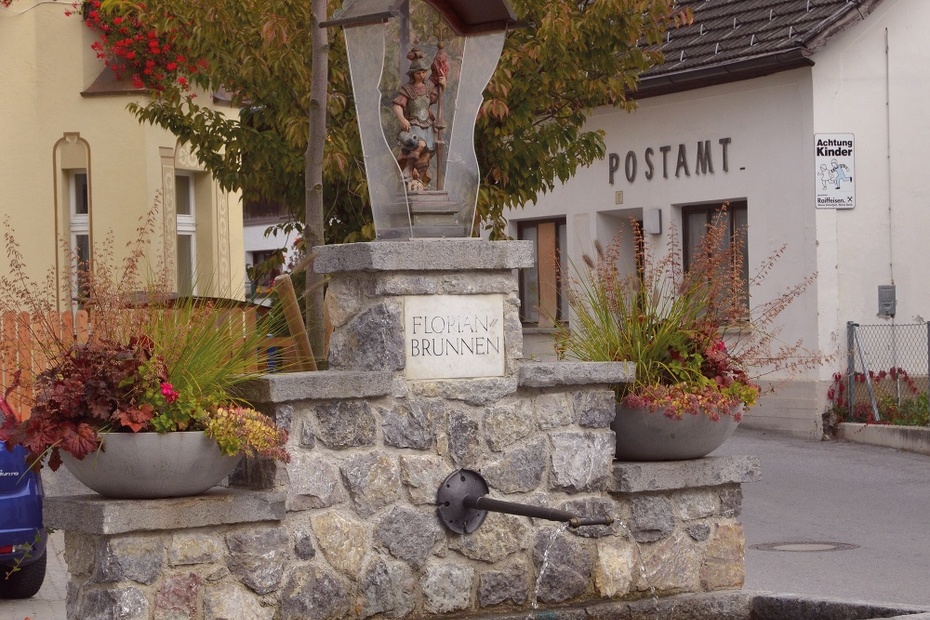 Short description:
The spiritual attunement on the way takes place in the famous Cistercian monastery Stams with its art treasures as well as in the pilgrimage place Maria Locherboden above Mötz. Far from the main roads, the route leads through an enchanting landscape with many chapels.

The Tyrol-Allgaeu Way of St James

This Alpine Route of St. James, which is both scenically and culturally very attractive, leads off the main roads over three Alpine passes, namely the Fernpass, the old Gaichtpass and the Jochpass. It crosses some of the most attractive hiking and holiday regions of Tyrol and southern Upper Allgäu on ancient Roman, trade and pilgrim paths.

The pilgrims to St. James can undoubtedly look forward to a particularly impressive route here. All the more so, as it mostly leads through rural, tranquil mountain regions, where people have been deeply influenced by faith and fear of the forces of nature for centuries. These regions are therefore particularly rich in churches and chapels with numerous art-historical gems, often from very different eras. In combination with the magnificent panoramic views, the constantly changing perspectives and the meditative, but now and then strenuous hiking in wind and weather through these alpine natural landscapes, this "camino" becomes an unforgettable path that demands all the senses, rich in intense experiences, encounters, experiential and perhaps also new insights about oneself.

Integration into the Jakobwegenetz of Austria and Germany

In the chapels of St. James and in the churches mentioned in the text there are stamped places along the St. James' Way. These pilgrim's stamps are nice memories in your own pilgrim's diary. In the intrnat. recognised pilgrim's identity card they serve as proof of the route completed. As an official document, the pilgrim's identity card also enables the pilgrim to stay overnight in special pilgrim accommodation, of which there are still few on this route. It can be obtained from the St. James pilgrim associations for a processing fee.

Directions:
Stams Abbey is internationally known for its artistically restored baroque monastery church of the Assumption of the Virgin Mary, a "basilica minor", as well as for its masterpieces of sacred art. Right next to it is the Stams ski high school, from which many Austrian stars of skiing have emerged, including Anita Wachter, Stephan Eberharter and Gregor Schlierenzauer. From the Stams Abbey (stamp office) west through the Stamser Eichenwald, past the sports field and on towards Staudach. ATTENTION: here the paths Jakobsweg Tirol and Tirol/Allgäu separate. After the bridge in the Staudach district, head north towards Mötz railway station and the railway underpass. Continue over the bridge over the Inn to the centre of Mötz with the Florian's Fountain and the parish church Maria Schnee in baroque style. Behind the fountain you follow the marked path to the end of Königsgasse and hike along the partly narrow, steep gorge path up to the waterfall, which is about 25 metres high, and further on to the sunny plateau, which lies under the enormous rock faces of the Mieminger Kette. Burg Klamm (13th century) is privately owned. Afterwards you walk westwards along the panoramic salt transport path to the Chapel of Our Lady and to the Klammer Mill, where you take a short walk up to the right to the parish church of St. Joseph (completed in 1780) of Obsteig. About 600 metres then turn left along the main road until after the town hall of Obsteig you turn right into the larch meadows and walk in a westerly direction to Arzkasten. Shortly after the small Mariahilf chapel, the hamlet of Weisland follows with the chapel of the Assumption of the Virgin Mary (1985), where you can admire an altarpiece by Franz Anton Zeiller from Reutte, considered one of the most beautiful chapel paintings in Tyrol. From Holzleiten at the end of the village near the large chapel "Zur Heiligen Familie" the old Roman road leads steeply down to Dormitz with its pilgrimage church of St. Nicholas and a statue of James the Elder next to the high altar. However, the pilgrim path branches off sharply to the right after the first houses in Dormitz-Roßbach, directly in front of the campsite. The narrow Reitergassl runs behind the campsite and brook along the slope towards Nassereith until it forks at the edge of the forest with a view of the village. Here briefly uphill in the forest and along the climbing garden and Nassereither See directly to the neo-Romanesque parish church "Zu den Heiligen Drei Königen", with a gilded statue of St. James (around 1790) and frescoes in the Nazarene style.

Arrive for sightseeing the day before departure. Stams Abbey: www.stiftstams.at

The pilgrimage site Maria Locherboden, high above Mötz and off the route, is also a must: www.locherboden.at ,

Safety guidelines:
It should be noted that there is an increased risk of accidents and injuries on pilgrim paths. Despite careful route planning, a basic risk always remains. Tour preparation through endurance sports, appropriate technical training and mental preparation reduces the risk of accidents and injuries. But please never forget that the weather in the mountains can change very quickly.

Equipment:
The personal pilgrim's equipment must be safe and serviceable and must meet the relevant technical standards. The rucksack should not exceed the weight of 15 kg. Every pilgrim is recommended to inform and prepare himself in detail in technical literature or on the Internet.

Getting there
By car: Either via Innsbruck on the toll Inntal motorway towards Imst to Stams or via Reutte and the Fernpass to Nassereith or via Obsteig/Mieminger Sonnenplateau to Stams. From Munich via Seefeld/Tyrol to Telfs and on the Inntalautobahn in the direction of Haiming/Imst to Stams.

Public Transit
Overnight accommodation: In Stams, the junction of two Jacob's Way routes, there are simple pilgrim accommodation and meals for pilgrims with identification, e.g. at Camping Eichenwald, www.camping-eichenwald.at. For men also in the monastery. Accommodation in all categories in Obsteig, Holzleiten, Dormitz, Nassereith.